The grammateus classification aims to encompass all aspects of the production of the document, from the perspective of the scribe, and to produce a broad categorisation. The premise of this approach is that most scribes worked from models, formal or informal, and built a document to suit a particular process.

The scribe must compose the document according to its purpose and intention by following some rules, either informal or established by training. While paying attention to the content, he arranges the structure, format, and layout of the document with the building blocks at his disposal.

In order to re-create how the scribe worked, the typologies of documents in the corpus were examined and grouped together according to the similarities of their construction. Each of these groups was then categorised according to their differences to establish a hierarchy of typical models.

This description presents a working classification of each Type, Sub-type, and Variation of documentary papyrus in the corpus.

Each Type encompasses documents where the scribe has utilised variable elements to construct the Sub-types in a broadly similar manner, but which also serve to differentiate them from any other Type.

All Variations of these Sub-types are so categorised because the inclusion of particular formulaic phrases, or other adjustments to the Sub-type, constitute a variant usually with a more specific, rather than general, purpose.

A more detailed description of individual Sub-types and their Variations can be accessed by using the highlighted links.

Keeping the purpose of the document firmly to the fore, from the perspective of the scribe, the following four main Types were formulated:

In applying each of the four general types listed above, the author of the content will have adopted a different perspective.

These Types are arranged in order, from the more dynamic to the static:

This reflects the choices available to the scribe when preparing to construct his document. Examples:

If the scribe wants to draw up – for example – a lease agreement, there are a number of different options available to him depending on the circumstances. If the document is a private agreement it can be written as a

15
In all these examples the scribe constructs these documents differently despite the similarity of their content.

Options for drawing a lease agreement. 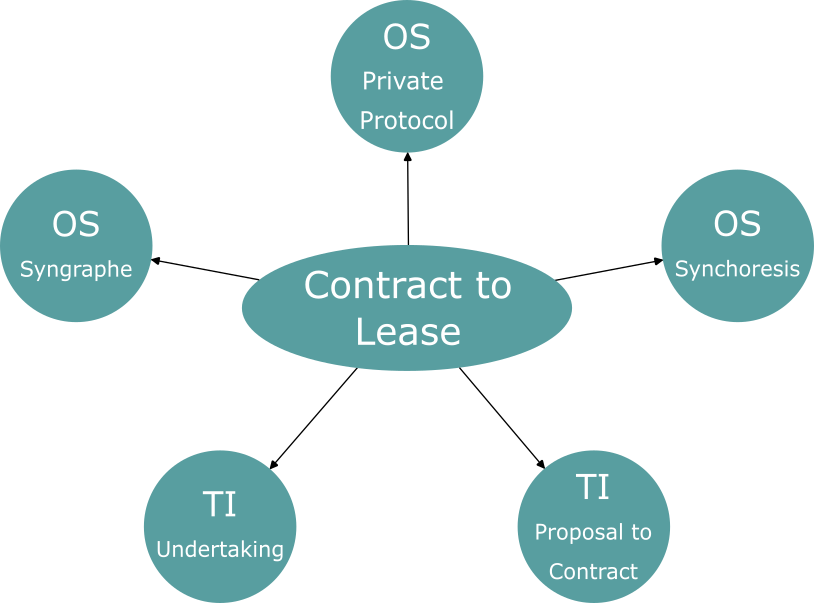 Some documents may traditionally be differentiated by their content in the literature but are found under one umbrella in this classification.

There is a broad range of content for documents written in the form of a [syngraphe]. A loan agreement drawn up in this way is often referred to in the literature as a daneion (δάνειον). However, this refers to the legal action taking place and not to the written document itself, which is drawn up by the scribe as a syngraphe. In fact, the document refers to itself as such in the validity clause of the contract: ἡ συν[γρα]φὴ τοῦ δανείου κυρία, “the syngraphe of the loan is valid” [19654 l.10, 99 CE, Hermopolis].

This is also the case with the lease agreement referred to in the literature as a misthosis (μίσθωσις): ἡ συνγραφὴ κυρία ἔστω [13134 l.38, 71 CE, Theadelphia].

Here there is a clear distinction made within the document between the legal action and the formal written record of that action, the document called a syngraphe.

Another type of syngraphe has the verb [ὁμολογεῖ + infinitive] and this construction is by far the most widely used for a diverse array of contracts and receipts. This type of syngraphe is often referred to in the literature as an [objective homologia]. These documents refer to themselves as either a syngraphe, a homologia, or sometimes both in the same document [23022 l.31, 26 CE, Oxyrhynchus].

21
Despite the different content, all these documents are drawn up by the scribe with the same typology.

Not all documents fit neatly into the model. In order to avoid opening up a new group for any such documents, it must be accepted that they may fulfil only some, rather than all, the criteria of a particular Type.

While there are receipts issued by the sitologos written as Objective Statements in the form of a syngraphe, e.g. [3124, 22229,43263], many more [sitologos receipts] are built around a subjective statement, μεμετρήμεθα... πυροῦ “we have had measured (to us) …wheat” [12198, 12333], but are constructed in the same way as all other receipts under the Type: Objective Statement: Sub-type: [receipt], except that they are subjectively styled.

Similarly under the Type: Objective Statement: Sub-type: [certificate], the variation: [calf sacrifice] is subjectively styled, at least for the certificate issued by the priest; the corresponding tax receipt is objectively styled.

In these cases, because these documents are a statement of a procedure or action, carry the date at the beginning, and have some form of official validation, they are best placed under objective statement, however incongruous this may appear.

Some form of ὁμολογῶ as the main verb constitutes the basis of many contracts and receipts, but they are not all constructed in the same way. Such a document may be referred to in the literature as a homologia, a basic agreement and a clear reference to its content. Many homologiai are drawn up by the scribe as objective statements presented in the form of a [syngraphe].

However, there are also subjectively styled homologiai constructed with different typologies although these are much fewer than objective homologiai:

Some documents have the characteristics of more than one category, and so can be on the border between two Types.

The Synchoresis is a notarial contract produced by the office of the chrematistai which records a private transaction, and is constructed around an objective statement συνχωρεῖ (“X concedes”) + infinitive. This fits most of the criteria for inclusion under the Type: Objective Statement. However, the opening address is the same as for a hypomnema, as are all the documents under the Type: Transmission of Information. Therefore this can be said to be a hybrid of these two types, but this hybrid form is the typical model of a synchoresis.

Orders to pay follow the standard opening of a business letter [from name <nom.>] [to name <dat.>] [χαίρειν] and so are to be found under the Type: Epistolary Exchange, as a variation of the business letter. However, a few III CE orders to pay are more like business notes with an opening address in the form of a hypomnema, as are all the documents under the Type: Transmission of Information. But, unlike business notes, these Orders to Pay also add the epistolary χαίρειν to the opening address. Therefore, these too can be said to be hybrid documents – but as most Orders to Pay are not drawn up by the scribe in this way, the general category, Orders to Pay, remains under Epistolary Exchange.

The aim is to provide a repository of typical models. In these hybrid cases, we note that the Synchoresis, although a hybrid, is a typical model of the sub-type, but that the few documents which are hybrid Orders to Pay are atypical in their construction.

The Type Recording of Information, which includes Registers, Lists, Accounts, and Reports, are (long) objective statements , many of which also have a hypomnema opening address. In this case, it is the fact that they are a hybrid, often with distinctive formats - long rolls, with many columns - which makes them distinctive enough from the other Types to be in a Type of their own.

Hybrid documents on the classification spectrum. 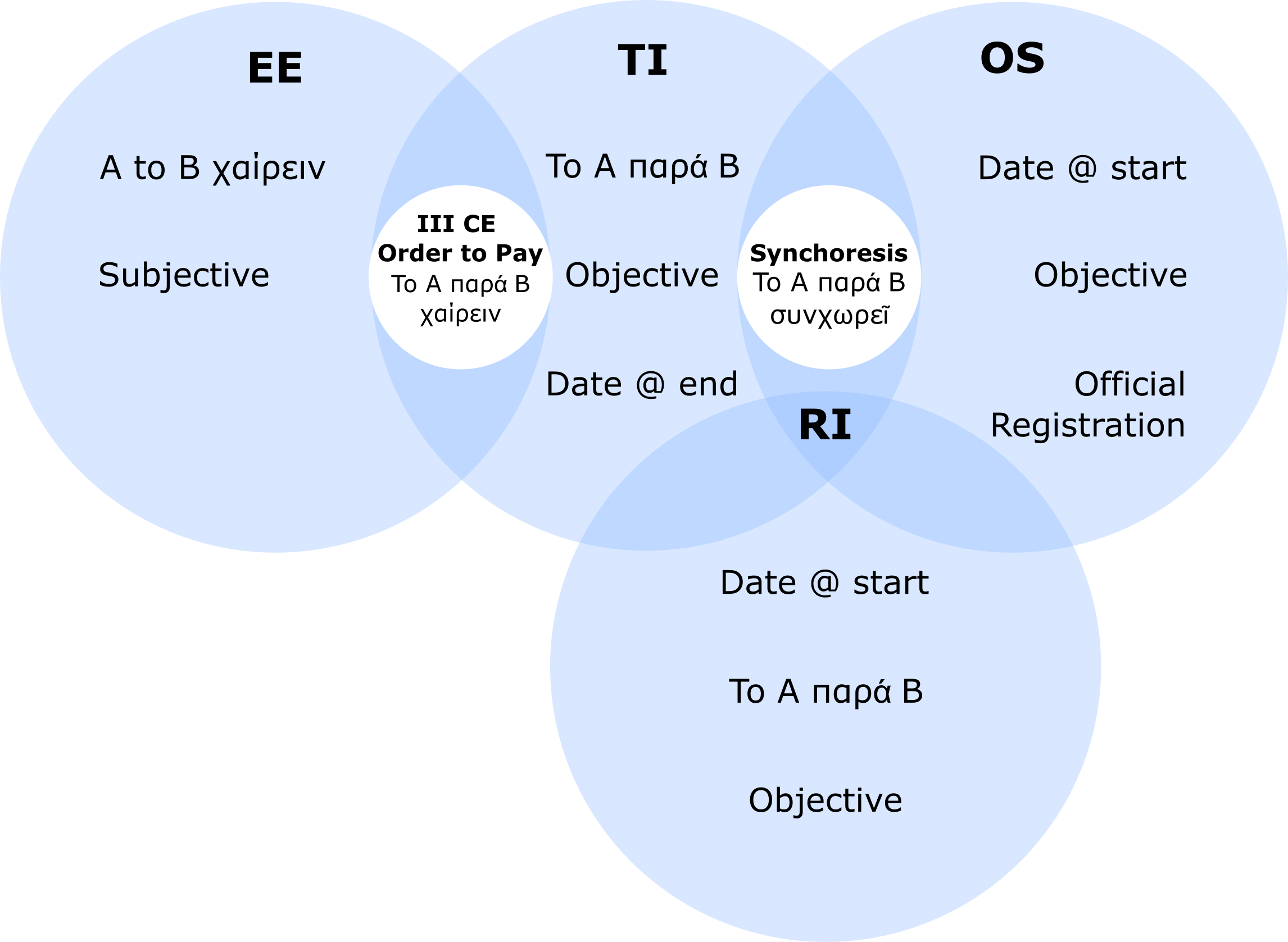 The descriptions which follow aim only to explain the positioning of each sub-type and variation within the model. The red links provide a more detailed analysis of the characteristics of any document.