The Type Epistolary Exchange encompasses all documents which are part of a multidirectional communication and are composed in the style of a letter. The formulation of the content is always subjective: the authors speak in their own name.

A spectrum of Sub-types and Variations can be mapped where the scribe adapts the epistolary format to suit a number of purposes, as follows:

The structural elements are arranged so as to establish a model document for each sub-type and variation : 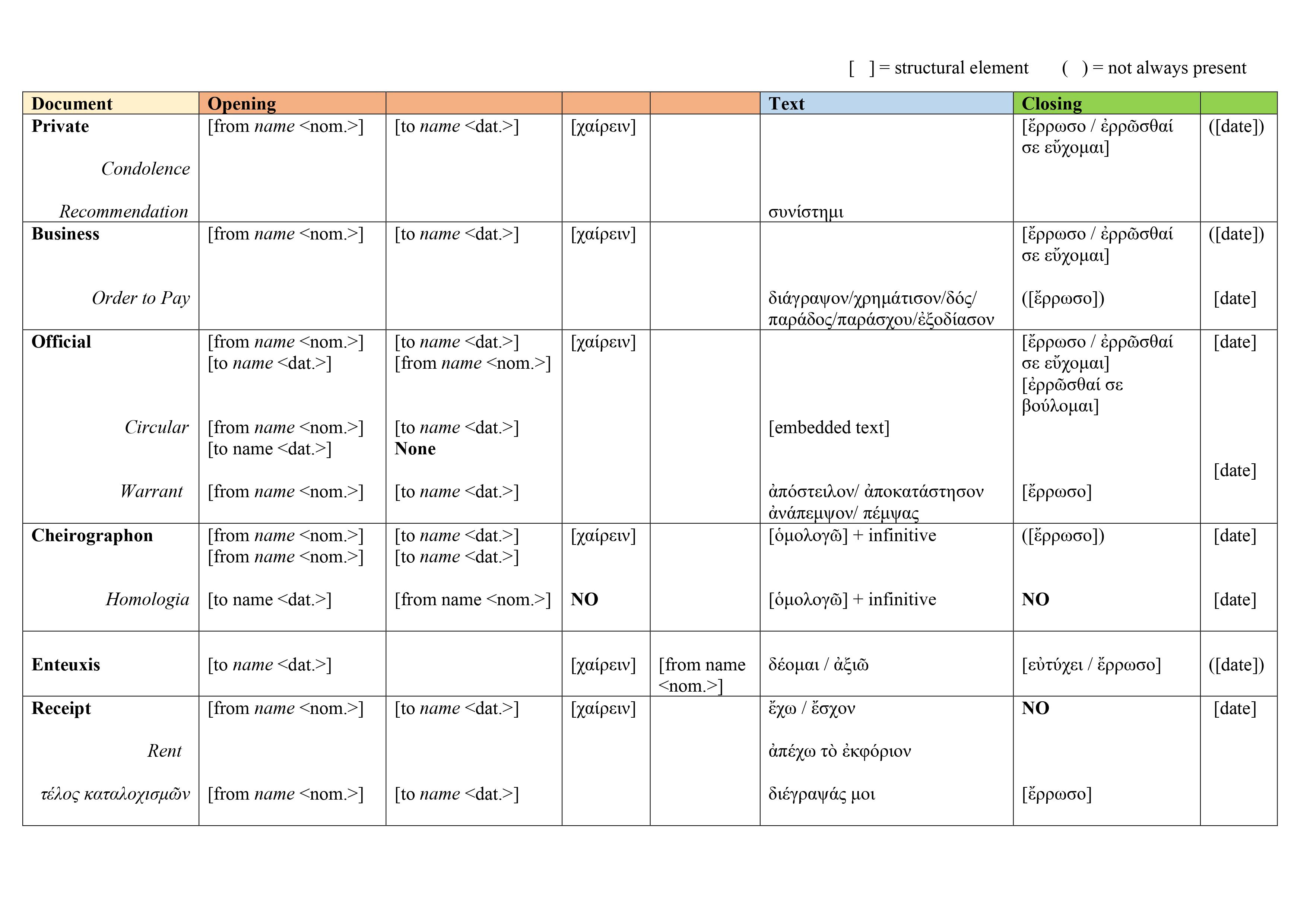 The [private letter] can be interpreted as a basic scribal model, easily adapted to facilitate the production of numerous sub-types of document with a variety of content.

A letter of [condolence] may have some expressions added to the opening address and contain typical phrases of consolation.

A letter of [recommendation] has distinct sections and is constructed around the verb συνίστημι ‘I introduce’.

There are generally no changes to the format and layout in both variations of the private letter.

The [business letter] is differentiated by its content. A [date] is not routinely included; however a distinguishing feature of the business letters in the Zenon archive (III BCE) is the inclusion of a [date@end], usually after the closing formula [755 257 BCE, Alexandria].

Other documents with business content are based on a different model, that of the ὑπόμνημα, (hypomnema) and are treated under the type Transmission of Information: sub-type [business note].

For an [order to pay] the scribe adapts the basic business letter model by omitting the closing salutation, but a [date@end] is always added. The formula remains fairly consistent throughout the Ptolemaic, Roman, and Byzantine periods.

A space may be left after the main text for the insertion of a validation signature or greeting [20647 160 CE, Oxyrhynchus].

Some orders to pay from III CE are based on a different model, the ὑπόμνημα, and are to be found under the type Transmission of Information: sub-type [business note_]. There are some of these different models with the opening address of a business note, but where the scribe has also added the epistolary greeting [χαίρειν]. This must be categorised as a hybrid variation with both letter and business note characteristics, e.g. [16336 261/312 CE].

A reverse form of the standard opening address is also found emphasising a hierarchical relationship, e.g. [12603 214-215 CE, Oxyrhynchus, addressed to the prefect; 18168 280 CE, Memphis, from a strategos to an epistrategos]; both are very formally written in a chancery hand.

There may be a number of hands involved in the production of an official letter, which can point to a process - blank spaces may be left by the scribe for the addition of other hands [17913 290 CE, Oxyrhynchus].

A [circular] letter is differentiated from a standard official letter in its purpose and structure. It is a letter sent to multiple recipients, usually containing some instructions, e.g. [20720 288 CE, Oxyrhynchus]. Circulars may also include some previous correspondence.

The opening formula is as for any official letter, but the shorter [to name <dat.>][χαίρειν] is also found, with the recipients addressed by title only [41725 223/181 BCE, Arsinoite nome].

Circulars from higher authorities to other officials usually close [ἐρρῶσθαι ὑμᾶς εὔχομαι] [21819 278 CE, Oxyrhynchus]. The more formal [ἐρρῶσθαι ὑμᾶς βούλομαι] is used when an edict or decree is being circulated [9286 l.7].

A [warrant], or order to arrest, has the specific purpose of ordering a person be brought before an authority. In the Ptolemaic period a warrant could be drawn up by the scribe as an official letter [1939 254 BCE, Philadelphia], or added as an apostil to the original petition [12922 34 CE Euhemeria]. Some warrants presented as apostils appear in an adapted letter form at the end of the original petition, with the epistolary opening followed by a brief order to deliver the accused person, and the date; the closing farewell is omitted [5475 150/139 BCE, Tebtunis].

Other apostils are written as a short statement: [to name <dat.>], a brief order, no farewell, and ending with the [date] [8810 l.40-42, 199 BCE], often in another hand. In the Roman period this form of apostil evolved into documents with a different typology and are categorised under Transmission of Information: sub-type [warrant].

Throughout the Ptolemaic and Roman periods the standard letter format was adapted to facilitate the drafting of private contracts in the form of a [cheirographon]. They differ from the standard letter in that there is no closing salutation, but like the official letter there is invariably a [date@end] [20987 48 CE, Oxyrhynchus]. The text is displayed in a single block with few features to distinguish sections [9159 276-277 CE, Philadelphia].

For contracts with typologies other than that of a cheirographon, see Transmission of Information: sub-type [statement]: variations [proposal to contract] and [undertaking], and Objective Statement: sub-types: [syngraphe], [synchoresis], [private protocol].

The subjective [homologia] is the same sub-type of document as a cheirographon but the infinitive χαίρειν is dropped [20176 44 CE, Arsinoite nome; 10875 161 CE, Theadelphia].

For the [enteuxis], the scribe adapts the standard letter opening by placing the addressee first and distancing the petitioner by placing the greeting between both names: [to name <dat.>][χαίρειν] [from name <nom.>] [3302 222 BCE, Arsinoite nome]; this is the inverted formula sometimes found in [official letters], but the unusual position of [χαίρειν] is found only in enteuxeis.

From the II BCE onwards a non-royal petition was drawn up with a different typology and is categorised under Transmission of Information: sub-type [petition].

After the standard letter opening, a receipt is constructed around the phrase [ἔχω / ἔσχον παρὰ σοῦ] ‘I receive/ have received from you’; the [date] is invariably written after the main text, and there is rarely a closing salutation [12175 201/230 CE, Karanis; 30083 III CE, Oxyrhynchus].

The surviving evidence for receipts for the payment of [rent] indicate that they were often written in the form of a letter and so constitute a variation with a specific purpose.

Rent receipts were also drawn up with a different as objective statements, see [rent receipt_16]

Receipts for the payment of taxes on the transmission of catoecic land [ τέλος καταλοχισμῶν ] constitute a variation by virtue of their specific purpose and uniform format.

These receipts are unusual for the Roman period in that they are oriented transversa charta, the writing against the fibres.

There is often a closing salutation, followed by the date, and a signature by the official.