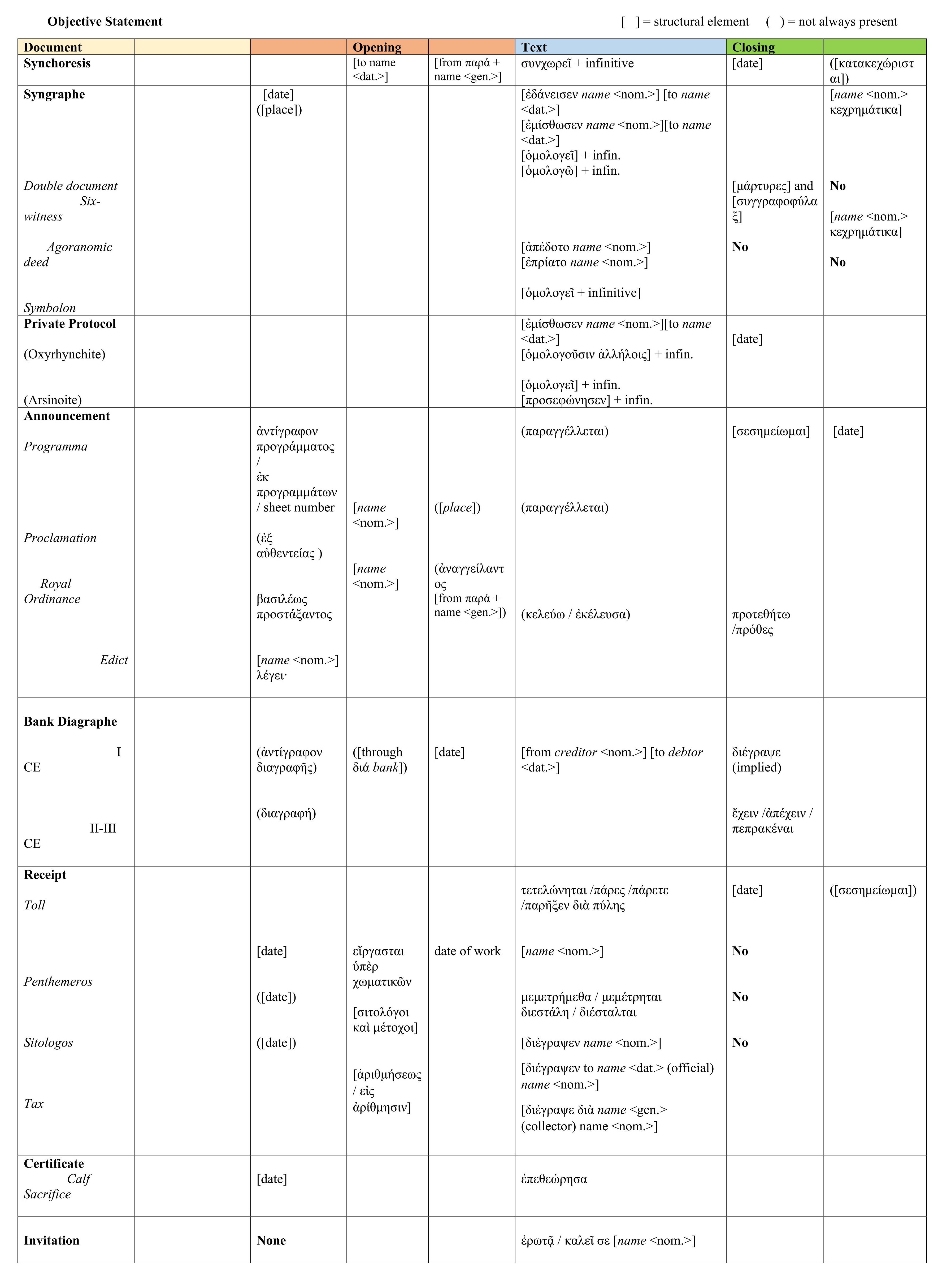 The Synchoresis is a notarial contract produced by the office of the chrematistai which records a private transaction. Unlike any of the other sub-types under the Type: Objective Statement, this document has the hypomnematic opening address more usually found in the Type: [Transmission of Information], along with a [date] placed at the end of the document. This can be seen as a hybrid document incorporating elements from two Types. It is placed under Objective Statement because it is constructed with [συνχωρεῖ + infinitive], and comes from an official source.

Alexandrian examples are simply addressed to the archidikastes [18561 I BCE, Alexandria], while later Oxyrhynchite examples carry a fuller address to the official [16537 II CE, Oxyrhynchus]. An official subscription after the [date] may sometimes be added to indicate the registration of the document [16537 l. 33 κατακεχώρι(σται)].

For other contracts under this type see Objective Statement: sub-types [syngraphe] and [private protocol]. For contracts with a different formulation see Epistolary Exchange: sub-type [cheirographon], Transmission of Information: sub-type [statement]: variations [proposal to contract] and [undertaking].

Documents constructed in the form of a [syngraphe] have a broad range of content and are constructed around an objective statement of a lease, or loan [ἐμίσθωσεν /ἐδάνεισεν name <nom.>][to name <dat.>], or for other contracts and receipts, a verb of agreement [ὁμολογεῖ] + infinitive.

In a simple syngraphe the date is placed at the beginning of the document and a statement of validation ἡ συγγραφὴ κυρία ἔστω [13134 l.38] at the end. With the emergence of the grapheion in the II BCE, a formal registration docket was placed after the main text [name <nom.> κεχρημάτικα] [66 105 BCE, Pathyris].

Some contracts and receipts in the form of a syngraphe have a subjective construction with [ὁμολογῶ + infinitive]. Even though they do not fulfill all the criteria for inclusion under this Type (e.g. they are not objectively styled), they are drawn up as syngraphai by a public notary and officially registered, and so are placed here.

Syngraphai drawn up as [double documents] appear in Greek from the late IV BCE. The scribe wrote the text twice on the same sheet, an inner script rolled up and sealed, and an outer script, open and available for consultation [5836 311-310 BCE; 5837 285-284 BCE (with seals), both Elephantine]. Six witnesses were required to validate the contract, along with a συγγραφοφύλαξ (keeper of the syngraphe) to whom the document was entrusted.

Double documents registered in the grapheion replaced the necessity for witnesses and a συγγραφοφύλαξ, and led to the addition of a registration docket at the end of the outer text, and the eventual shrinking of the inner text to a single line – these are often referred to as agoranomic deeds.

Another variety of double document, the symbolon, displays a [ὁμολογεῖ + infinitive] construction. Many of these are receipts [1765 252 BCE, Philadelphia].

Double documents are found in a transversa charta format, with the writing against vertical fibres e.g. [5838 III BCE, Elephantine], or in this orientation with horizontal fibres. Some of these documents can be quite wide [84 II BCE; 95 I BCE both Pathyris]. Some symbolon receipts are long and narrow, typical of the demotic format [762 III BCE, Arsinoite nome].

For other contracts under this type see Objective Statement: sub-types [synchoresis] and [private protocol]. For contracts with a different formulation see Epistolary Exchange: sub-type [cheirographon], Transmission of Information: sub-type [statement]: variations [proposal to contract] and [undertaking].

The private protocol is a privately produced contract which follows the formulation used by documents from notarial offices. However, as the document is privately drafted, the scribe places the date at the end of the contract. This means that the document begins directly with the objective statement [ἐμίσθωσεν name <nom.>][to name <dat.>] [15404 III CE]. These contracts are attested for the most part in the Oxyrhynchite nome, usually for lease agreements, but also occur in the Arsinoite nome, drawn up there for loan agreements [14118 223 CE] or the sale of animals [13078 299 CE].

For other contracts under this type see Objective Statement: sub-types[syngraphe] and [synchoresis]. For contracts with a different formulation see Epistolary Exchange: sub-type [cheirographon], Transmission of Information: sub-type [statement]: variations [proposal to contract] and [undertaking].

This sub-type includes documents which are public announcements by the king, prefect, or officials. These are also documents which might be publicly displayed. While there is no single definitive sub-type, the variations are distinguished by their purpose and specific statements.

A [royal ordinance] (πρόσταγμα) is a decree or command from the Ptolemaic period establishing a law or regulation, or setting a precedent. It opens with the statement βασιλέως προστάξαντος ‘by order of the king’ [ 5775_2   270-269 BCE, Gurob], sometimes followed by the name of an intermediary. The [date] follows the main text. These decrees were usually publicly displayed and any that survive are found embedded in other texts [ 5311 l.22-55, 124 BCE, Tebtunis].

An edict (διάταγμα) is an instruction or order issued to the population by the emperor or prefect to establish a law, and so covers a wide range of subjects. It opens simply with [name <nom.>] λέγει· ‘ N says:’ e.g. [10801 l.1-2, 134 CE, Theadelphia] followed by a direct statement in the first person κελεύω/ἐκέλευσα “I order/ordered” [10234 136 CE, Arsinoite nome]. An order to publicly post the document may follow προτεθήτω/πρόθες [9034 138-161 CE, Arsinoite nome]. Those that survive are generally copies or found embedded in other texts.

A [proclamation] is a formal announcement issued by high-ranking officials of the administration and judiciary. They concerned a wide variety of subjects and were publicly posted. Some open with the name and location of the official, sometimes including the statement παραγγέλλεται, followed by a signature and date. If the verb is not present the announcement begins with ἐξ αὐθεντείας [name <gen.>] ‘on the authority of N ’ followed by a title [16869 245-249 CE, Oxyrhynchus].

The approval of a person nominated for a liturgy was made by the strategos through a [programma], which was then publicly displayed. Extant examples are mostly copies, indicated by the opening ἀντίγραφον προγράμματος [8942 169 CE, Arsinoite nome]; or if the copies were pasted together in a τόμος συγκολλήσιμος, the number of the sheet or roll [23526 165 CE, Hermopolite nome]; or they survive as abstracts from registers indicated by the opening ἐκ προγραμμάτων + [date] [110156 185 CE, Cynopolite nome]. The objective statement is constructed with παραγγέλλεται ‘it is proclaimed/announced’ [8942 l.13], but this may not always be present as the fact of publication was in itself the approval [21792 l.1-13, 260 CE, Oxyrhynchus]. The signature of the strategos was added, followed by the [date].

As there were stages to the whole procedure, windows for later additions to the document were left by the scribe [21792]. The latter example is long and narrow, with the fibres horizontal, typical of the demotic format, but another example suggests that these programmata may also have been written transversa charta [programma_].

A [bank digraphe] or bank receipt records a payment made through a bank, and can be the final stage in a contract, to which the receipt was added at the end. I CE examples survive as abstracts from bank registers and so open with the heading ἀντίγραφον διαγραφῆς [through διά bank] followed by the [date], after which the names of the parties are recorded. The verb [διέγραψε] is not explicitly stated, though implied.

II-III CE bank receipts are self-contained documents, no longer appended to a contract, but as contracts in their own right with the [date] at the beginning, followed by the name of the bank [through bank διά <gen.>], and continuing with the names of the parties [9302 151 CE Arsinoite nome]. There is no conjugated verb to introduce the infinitive which may be ἔχειν / ἀπέχειν / πεπρακέναι.

First century CE registers of bank receipts from the Hermopolite nome also include copies of the relevant contract, written in wide sheets in more than one column [22825 44 CE, with bank receipt in col.(iii)]. This format continued into the following centuries. Those from the Arsinoite nome are in pagina format.

The majority of receipts are framed as objective statements with the content being the variable element.

A [toll] or customshouse receipt is a document that attests the payment of a tax levied on goods transiting through a toll, or checkpoint. The receipt opens directly with the objective statement recording which toll has been paid, τετελώνηται διὰ πύλης Σοκνοπαίου Νήσου λιμένος Μέμφεως ‘the tax for the harbour of Memphis has been paid (for passage) through the gate of Soknopaiou Nesos’ [15075 146 CE, Soknopaiu Nesos]. Others may simply state πάρες διὰ πύλης ‘let pass through the gates...’ and record the number of donkeys or camels and the goods they carry [10914 80 CE, Arsinoite nome]. The [date] of payment is placed at the end followed by the signature of an official.

A line may be drawn at the end of the text to prevent any further additions [15072 II CE, Soknopaiou Nesos] and there may be a seal [14355 133 CE, Philadelphia]. Some receipts were prepared beforehand, as evidenced by a change of hand where the details of the transporter and transportation are entered [26703 II-III CE, Arsinoite nome].

Upon completion of the annual obligation to work five days on dyke and canal maintenance, a [penthemeros] receipt was issued. These receipts were produced in a few stages: the scribe in the office of the presiding official (the κατασπορεύς) wrote the date (year only), and the objective statement εἴργασται ὑπὲρ χωματικῶν ‘work has been done on the dykes’ [14301 II CE, Tebtunis]. At the work site the remaining details were completed by the overseer, i.e. the date (month, days), the location, and the name of the labourer [9452 II CE, Theadelphia]. An official signature may follow [14581 146 CE, Theadelphia].

Many of these receipts are squarish in format [13877 III CE, Philadelphia], or are horizontally oriented with the writing along the fibres [9393 II CE, Karanis].

The sitologos issued receipts for the payment of land taxes and also for transactions concerning private stocks held in the local granary. The former often involve a subjective statement; the latter an objective one. Receipts for private transactions do not usually include a date of issue, but will refer to the year of harvest from which the amount is to be taken.

Sitologos receipts are also composed as objective statements in the form of a [syngraphe], with an infinitive construction [ὁμολογεῖ...μεμετρῆ(σθαι)] [3124 II BCE Hermopolite nome].

There are a variety of formats, the writing predominantly along horizontal fibres. The text is written as a single block, perhaps with an enlarged first letter [11732 III CE, Nilopolis], and little use of ekthesis or eisthesis.

A certificate of purity was issued on examination by the priest of any calf offered for sacrifice in a temple. The receipt opens with the [date], the main text acknowledges the examination ἐπεθεώρησα ‘I inspected’, describes the animal, and states that a seal of purity has been affixed to the animal’s horn [13878 II CE, Soknopaiou Nesos].

These receipts are usually written on small squarish pieces of papyri, with the writing along horizontal or vertical fibres.

An invitation is a privately produced document asking the recipient to attend a celebration. There is no date, no opening or closing salutation, and it usually comprises a single objective request beginning ἐρωτᾷ / καλεῖ σε [name <nom.>] ‘ N requests/asks you’ with only the host’s name specified.