The Type Recording of Information encompasses all documents which constitute administrative lists and reports. These are objectively styled and often have a hypomnema opening address, thus combining some of the characteristics of more than one Type of papyri. 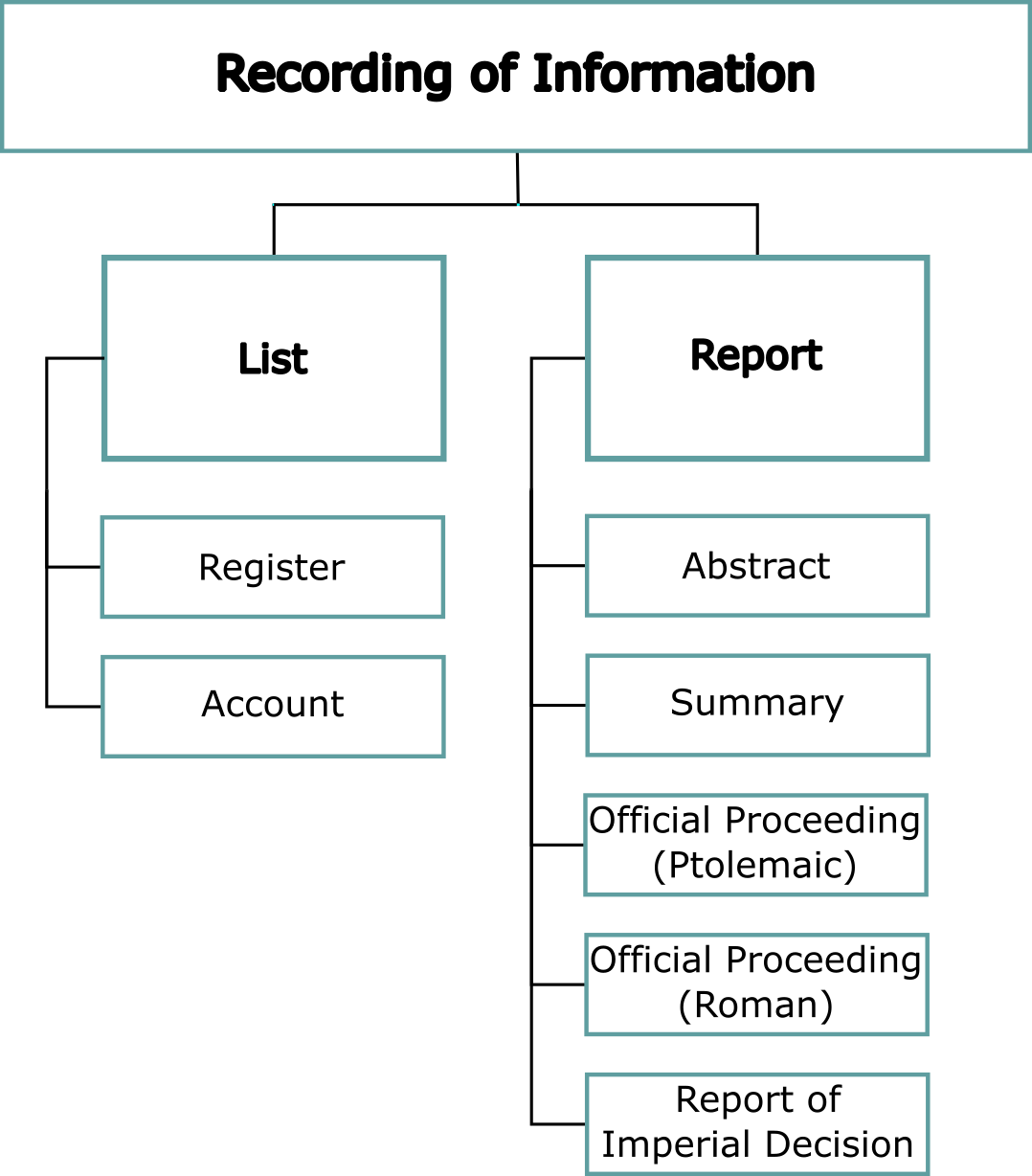 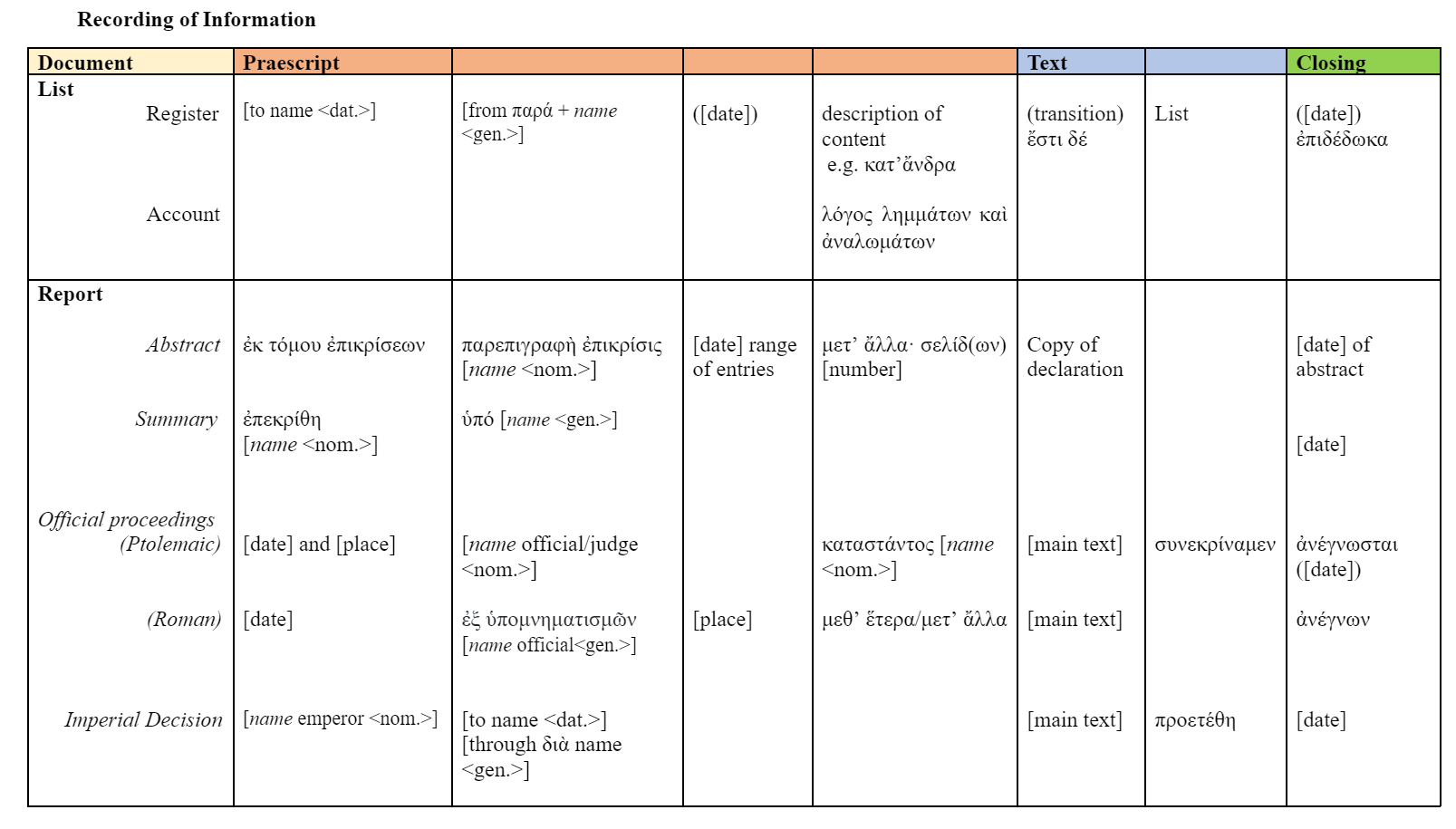 A [register] is a repository for the archiving or future transmission of information. Most registers include a list of some kind, but lists can also be stand-alone documents. A register has a distinctive format in that it is a single document made up of several columns of text spread over a roll of papyrus. There may be an opening address in the form of a hypomnema which usually places a document under the type [Transmission of Information] [9281 208 CE, Arsinoite nome]; however, there may often also be an objective statement [41441 III CE, Arsinoite nome]. Other distinctive features may include a heading describing the contents e.g. list of persons [44599 l.2, 115-114 BCE, Tebtunis; 12794 l.4-6, 222 CE, Arsinoite nome], reference indications such as column numbers [12794], and marginal signs [4021 I BCE, Herakleopolite nome]. All of these characteristics serve to distinguish these documents from any other Type in the classification.

The sub-type [report] covers documents which are written copies of the information in a register or from judicial or administrative proceedings. It is divided into five variations.

While abstracts contain much of the information found in a particular section of the register, a [summary] is a much more condensed version of the same information. These have been found only in reference to the epikrisis of veterans upon their discharge from the army. These are small slips of papyri with simply the name of the veteran, an official, and the date [20198 II CE; 20322 II CE, Oxyrhynchus].

Reports of official proceedings concern cases brought before the judicial courts or are reports of administrative meetings. In the Ptolemaic period these survive mostly as reports of legal cases brought before the chrematistai. They are preserved as copies on long horizontal rolls with several columns of writing [3562 119 BCE, Thebes], and repeat the specifics of the case in indirect speech. The official in charge of the report, the eisagogeus, appends his signature at the end, along with a validation in the passive voice, ἀνέγνωσται “it has been read over” [3510 136/83 BCE, Memphis].

These reports differ from their Ptolemaic counterparts in that the cases presented were recorded in direct speech, as they proceeded, possibly by way of shorthand. The transcript was recorded in the journal of the presiding official, a copy sent to the public archive, and another copy publicly displayed. From the journal entry, abstracts could be provided and this is the source of most of the evidence for these documents. These may be embedded within the texts of other documents e.g. [10732, l.131-146, 114-115 CE, Arsinoite nome], and open with the date, title and name of the presiding official, the place of the hearing, and the parties involved. The narrative of the case as it unfolded is then repeated. A final decision may be delivered. At the end of the transcript, an official signs ἀνέγνων “I have read over” [8929 II CE, Soknopaiou Nesos].

These copies of reports are preserved on long horizontal rolls sometimes with several columns of writing, and these columns may be numbered [20506 c. 186 CE, Oxyrhynchus].

A reply (ἀπόκριμα) is delivered orally to an individual – or a representative – who has appeared before the emperor with a formal petition; a subscription (subscriptio, ὑπογραφή) is the written form given to this reply. This written reply is to be found at the end of the original petition, and both petition and reply may then be publicly displayed. Only copies made on the basis of the public posting survive. The subscription opens with the emperor’s name, the name of the petitioner or representative, and is followed by a verbatim report of the emperor’s decision, and an order that the decision be publicly posted προετέθη “let it be displayed” [20201 II CE, Alexandria; 22552 II CE, Oxyrhynchus].