The Type Transmission of Information encompasses all documents which convey information without the expectation of a reply. They are drawn up by the scribe in the form of a hypomnema, which appears in its most basic form in the business note (see below Business Note). This structure is adapted and expanded by the scribe to accommodate more formal documents, but is also used for private contracts, perhaps in imitation of official documents. The formulation of the content is usually subjective. 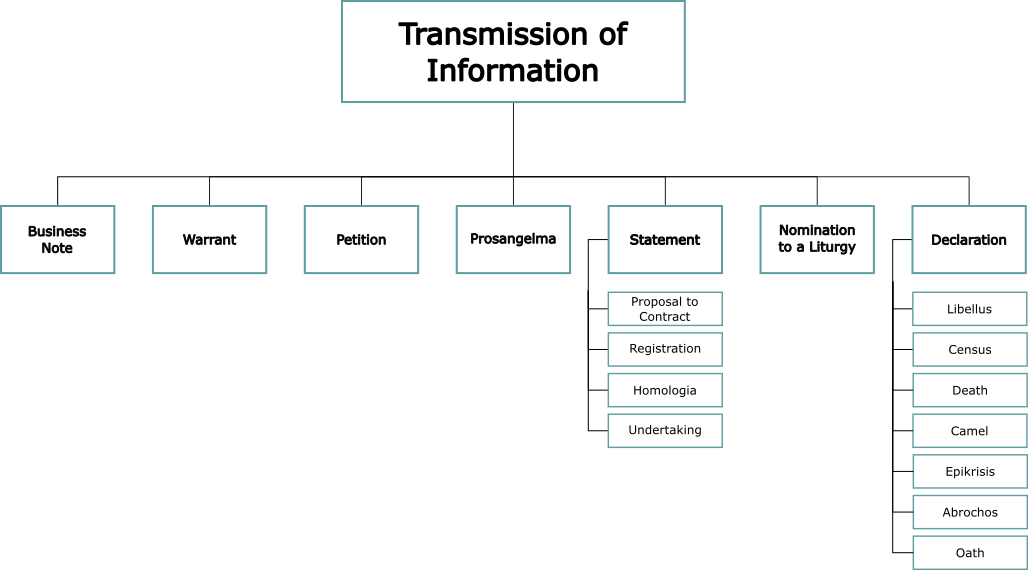 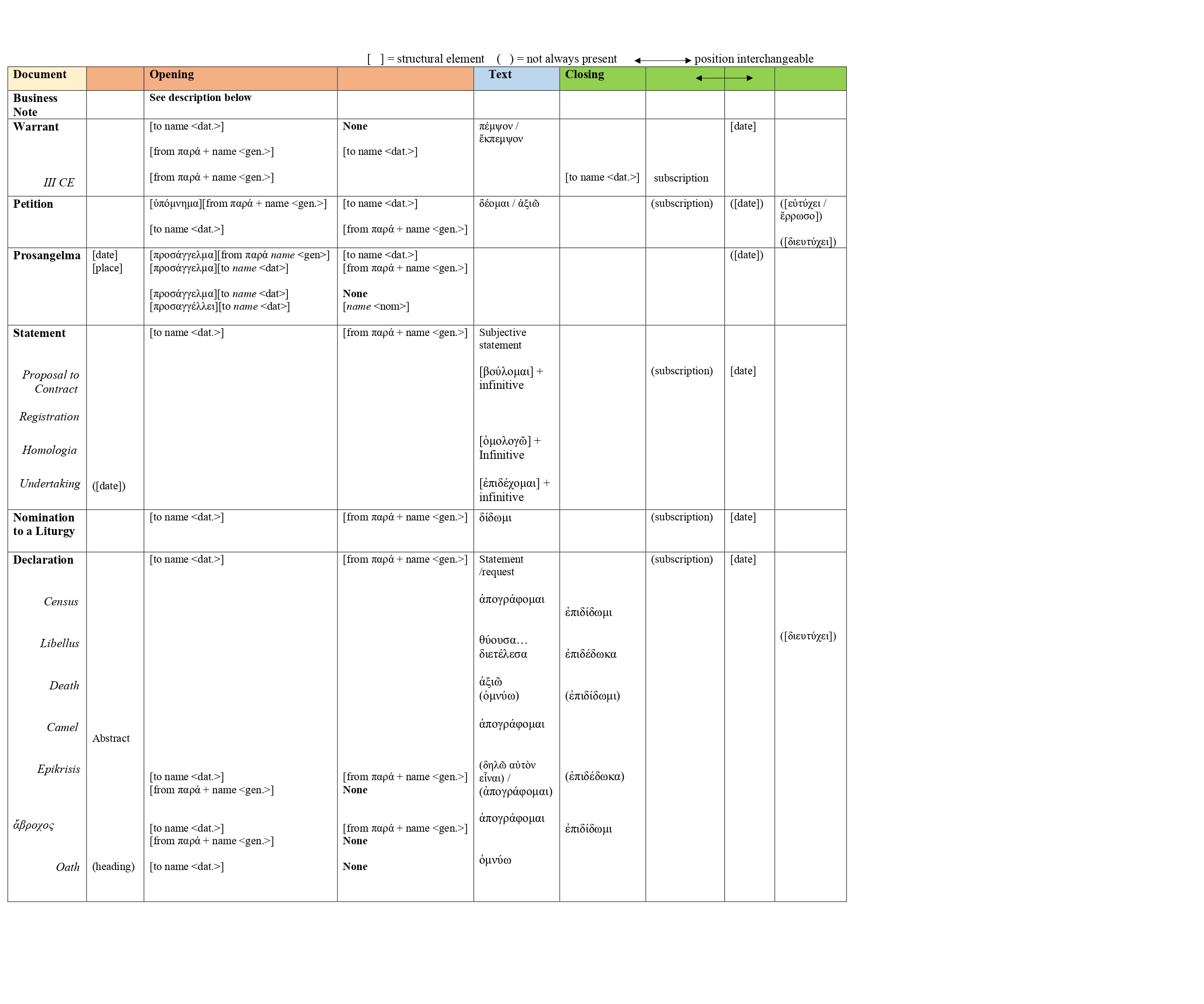 A [business note] is a short communication, often concerning the management of an estate or some official business. In documents of the Ptolemaic period these notes were explicitly referred to as hypomnemata (memoranda), and the basic structure of the hypomnema is carried through all the sub-types of Transmission of Information, with some variations. The structural elements of the hypomnema from III BCE-III CE are as follows: 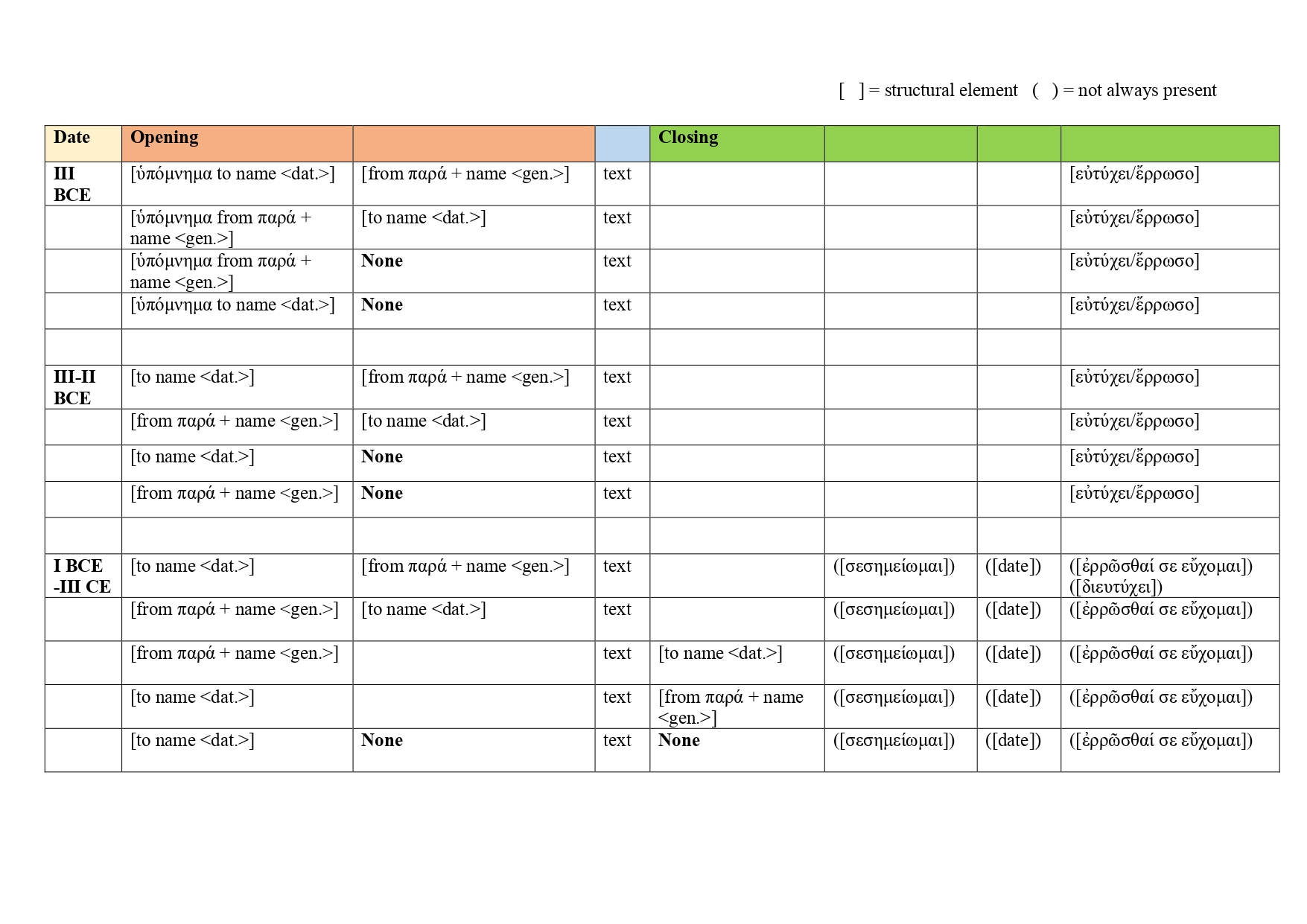 There are discernible differences in construction between early and late Ptolemaic business notes, with the more regular addition of a signature and date in the Roman period. Business notes from the III CE Heroninus archive display a mostly uniform structure where the scribes clearly worked from a model, with the use of windows between the end of the main text and the [date] allowing for a note of validation by way of a signature, usually in a second hand.

There is a clear resemblence between the III CE business note and the warrant of the same period as the latter evolved to become more characteristic of the short notes produced by the private scribes of an estate, cf. [warrant].

A warrant is an order from an official to have an accused person brought before him. Ptolemaic warrants, placed as an apostil at the end of a petition, have a short hypomnematic opening [to name <dat.>], no addressor, followed by a brief order [8810 , l. 40-42 199 BCE, Oxyrhyncha].

In the Roman period the apostil came to be written separately from the petition as individual warrants [25107 early I CE; 26779 II CE; 26701 II-III CE, all Oxyrhynchite nome]. For these warrants the scribe retained the horizontal appearance of the apostils at the end of petitions and wrote the text on transversa charta sheets [26779, 31276 III CE, Arsinoite nome].

In the mid-III CE influence from the [business note] led to a change in the opening address for warrants, opening now with the complete formula [from παρά official <gen.>][official <dat.>] [31339 l.1-2, III-IV CE, Oxyrhynchus], placing the issuing official at the top. Occasionally the recipient is moved to a closing footer [name <dat.>] as is often the case in business notes from the III CE Heroninus archive. With this change, there is often a signature to validate the document σεση(μείωμαι) “I have signed” [31339 l.6], similar to business notes of the same period e.g. [22671 III CE].

Other warrants could be drafted as an official letter, or as an apostil in letter form, see Epistolary Exchange: sub-type [official letter]: variation: [warrant].

Early Ptolemaic petitions have the explicit label ὑπόμνημα and open with the full address [ 1120 III BCE Philadelphia]. Later Ptolemaic petitions drop the label [316254 184 BCE, Tanis] and continue in this form into the Roman period [19506 62-66 CE, Hermopolis]. The opening address may be extended to include the patronymic, sometimes occupation, and location of the petitioner [12913 29 CE, Euhemeria].

The scribe may use some visual devices to distinguish the various sections of the petition: e.g. ekthesis and eisthesis to distinguish either part of the opening e.g. [44717 154 BCE, Herakleopolite nome; 10392 296 CE, Karanis; 13798 137 CE, Theadelphia]; a paragraphos separating the main text from the closing salutation and any subsequent subscriptions [12925 34 CE, Euhemeria; 21741 295 CE, Oxyrhynchus]; a space between the closing and the bottom margin to accommodate a subscription e.g. [44723 c.153 BCE, Herakleopolis; 3094 108 BCE, Hermopolite nome].

A [prosangelma] (προσάγγελμα) is the formal notification of an offence. These III BCE documents are addressed to a local official, usually at village level, and record the offence in a brief statement.

Following the model of the explicit hypomnematic opening address, the scribe adjusts the designation and writes [προσάγγελμα][to name <dat>][from παρά name <gen>] [1934 ; 2077], or its inversion. These documents are distinctive in that there is no closing statement or salutation.

After the III BCE, prosangelmata took on the characteristics of a petition by conforming to the more standard hypomnema form, and in many cases by making a formal request or plea for a legal resolution, see [petition_].

This sub-type covers all documents which make a formal request, opening with the hypomnema address, and followed by a [subjective verb + infinitive] construction. While there is no single definitive sub-type, the variations are distinguished by their purpose and specific statements.

The [proposal to contract] was one of two ways a scribe could draw up a contract using the hypomnema formulation; the other was as an [undertaking] to contract. The proposal was a formal request by the addressor to enter into an agreement with the addressee. These documents could be submitted both to private individuals and to public officials and were in use from the late I BCE into the Byzantine period.

After the hypomnema opening, the construction βούλομαι + infinitive introduces the request. A brief description of the addressor may be added in the space between the end of the main text and the date [10115 l.25, 159 CE, Arsinoite nome]. There can also be a subscription by the addressee signifying his acceptance of the proposal [10593 l.30-33, 119 CE; 8991 l.24-25, 151 CE, both Arsinoite nome]. The [date] invariably follows.

A document of [registration] was an application to publicly register a private action or event. It was styled as a request and as such is different to a formal [declaration]. The documents are addressed to various officials depending on the process required.

A [homologia] is an agreement or acknowledgement with some form of ὁμολογῶ as its main verb. There are only two complete examples of a homologia with the hypomnema opening formula before the end of the III CE: [78603 196 CE, Oxyrhynchus], the substitution of another person to take care of a tax matter, and [17553 215-216 CE, Panopolis], the provision of a surety for a fisherman. Fulfilling the criteria for inclusion under Transmission of Information, these homologiai are subjectively styled. From the IV CE there are more than 40 examples of this type of document, the majority of them concerning sureties.

Another variety of subjective homologia can be found under Epistolary Exchange: sub-type [cheirographon] variation: [homologia]. Objectively styled homologiai may be found under [syngraphe._].

An [undertaking] to contract was drawn up as a formal statement of intent, rather than a request to enter into an agreement (for which see [proposal to contract]). They come mostly from the Oxyrhynchite nome and concern lease agreements, often for the contracting of labour for vineyards.

The pagina format predominates, but sometimes with an elongated format, [15410 260 CE; 16881] which may be influenced by the Oxyrhynchite lease agreement written as a [private protocol].

Nomination to a Liturgy

The [nomination to a liturgy] was a list of suitable candidates recommended for compulsory public service compiled by local officials and sent to the strategos for approval.

This sub-type covers all documents which make a formal [declaration] with the hypomnema opening address, followed by a [subjective verb + infinitive] construction. Declarations are of a standardised structure and highly formulaic so that the model could be reproduced by any scribe in every small village throughout Egypt. While there is no single definitive sub-type, the variations are distinguished by their purpose and specific statements.

A compulsory [census] declaration was made periodically by all Egyptian households recording age, sex, status, and property-holding information for every member.

The pagina format is usual [13997 I CE, Philadelphia]. The addressee and addressor may be separated by a space [11983, 10195] with the initial letters of each part enlarged. Other examples present the address to the official in ekthesis to the rest of the text [12174, 12875 II CE, Soknopaiou Nesos], or the whole text in a single block [19335 II CE, Herakleopolite nome].

A declaration of pagan sacrifice, a [libellus], was issued by village officials as proof that the applicant had sacrificed to the gods in their presence. A few dozen are preserved, and only from the summer of 250 CE; the greatest concentration of these are from Theadelphia.

With the standard hypomnema opening the scribe was obliged to address not one official but two, τοῖς ἐπὶ τῶν θυσιῶν ᾑρημένοις, “to the (officials) in charge of the sacrifice”, followed by the declarant’s name [from παρά + name <gen.>] and place of origin or residence [12907 l.1-3].

While for practical purposes these documents are declarations, strictly speaking they are requests for certification. This may explain the presence of a closing salutation, unusual for a declaration: διευτυχεῖτε [11978 l.14; 13936 l.11].

The presence of more than one window for the insertion of official signatures at various stages of the process, clearly indicate that these documents were drawn up by the scribe in advance, see [libellus_11] and references therein.

The hypomnema opening is followed by information on the deceased, his tax status, and his relationship to the declarant. The formal request is made ἀξιῶ “I request…”, ending with an oath ὀμνύω…ἀληθῆ εἶναι I swear (this) to be true [20533 I CE, Oxyrhynchus].

The subscription may include a description of the declarant, a note from the official, the signatures of both declarant and official, and the [date] [12901 II CE, Arsinoite nome].

In Roman Egypt ownership of camels had to be declared annually for taxation purposes. Most [camel] declarations are from Soknopaiou Nesos in the Arsinoite nome, II-III CE.

In most of these documents the scribe wrote a summary docket in the form of a heading, before the opening address [9075 l.1, 137 CE] Σοκνοπ(αίου Νήσου). κάμηλ(οι) γ. After the address to the strategos and royal scribe, information on the declarant and number of camels follows. The formal declaration begins ἀπογράφομαι “I register…”.

There follows a series of subscriptions, the first where the official confirms the registration of the declaration, and adds the [date]. Other officials count and verify the number of camels and each one appends his signature and the [date].

As a boy enters his fourteenth year, a declaration of [epikrisis] had to be made by his parents to ensure an exemption from the payment of poll-tax. This was required only for those who belonged to the privileged strata of society: metropolites, citizens of πόλεις, and Roman citizens. Most surviving examples come from the Arsinoite and Oxyrhynchite nomes, and from I-III CE.

Documents from Oxyrhynchus tend to be written on long, narrow, sheets, i.e. the demotic-style [78617], similar to the format of the private protocol contract typical of the region, see Objective Statement: sub-type: [private protocol].

A farmer could declare his land to be [uninundated land] and so claim a reduction in tax payments. Examples of these declarations have been found mostly in the Arsinoite and Oxyrhynchite nomes, and date from mid-II to mid-III CE.

The address to the officials can be made with the full hypomnema opening [12741 II CE, Oxyrhynchus], or the shorter version [8959 II CE, Karanis]. The declaration itself begins ἀπογράφομαι “I register”, followed by the details of the land and its location. A formal statement can be added διὸ ἐπιδίδωμι τὴν ἀπογραφήν, “therefore I make the declaration” [13753 169 CE, Arsinoite]. The [date] comes before the subscription, which includes the signatures of one or more official. The scribe may allow windows for the later insertion of an official signature [13753].

Anyone notified of their appointment to a liturgical office had to swear an [oath] to perform their duties responsibly. Such oaths range from II CE to early IV CE, with the best preserved examples from the Oxyrhynchite nome.

The format of the Oxyrhynchite examples is of the demotic-style, long and narrow [21618 II CE]. The scribe allowed a large space between the end of the text and margin to facilitate the addition of the subscription.